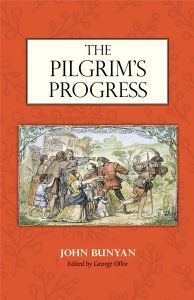 THE PILGRIM'S PROGRESS: Edited by George Offor, including Bunyan’s own Marginal Notes

Other than the Bible, there is no book written in the English language that has been published more than “The Pilgrims Progress”, by John Bunyan. We believe there are two primary reasons for this. First, the book is thoroughly and eminently Scriptural. But secondly, and just as importantly, it is profoundly practical, being a deeply experiential and spiritual account of the realities of the true Christian call, conversion, walk, opposition, and spiritual rewards, both temporal and eternal; all applied to pilgrims of various gifts and capacities.

The main reason this particular edition of Pilgrims Progress was selected is because the original editor, George Offor, carefully reviewed all eight of Bunyan’s own editions being careful to produce a copy that adhered strictly to Bunyan’s own revisions of the text. But in addition, Offor was also careful to include Bunyan’s Marginal Notes. Bunyan himself provided these notes and insisted that they were one major key to understanding the text, the other being the illuminating work of The Spirit. We have made no changes to Offor’s/Bunyan’s text in this edition. May it be blessed to your soul as it has been to millions before you is our prayer.

Charles H. Spurgeon loved reading and re-reading this work, claiming to have read it over 100 times! Quite often his wife read it to him in the afternoon for relaxation and meditation. He often quoted Bunyan in his sermons declaring, "Though his writings are charmingly full of poetry, yet he cannot give us his Pilgrim's Progress, that sweetest of all prose poems, without continually making us feel and say, 'Why, this man is a living Bible!' Prick him anywhere, his blood is Bibline, the very essence of the Bible flows from him. He cannot speak without quoting a text, for his very soul is full of the Word of God."

George Whitefield said of this book, "It smells of the prison. It was written when the author was confined in Bedford jail. And ministers never write or preach so well as when under the cross: the Spirit of Christ and of Glory then rests upon them."

John Newton added, "Of all our author's writings, there is no one perhaps so universally and deservedly admired as his Pilgrim's Progress, in which he gives a delineation of the Christian life under the idea of a journey or a pilgrimage, from the City of Destruction to the heavenly Jerusalem. In this treatise Bunyan appears not only as a writer well instructed in the mysteries of the kingdom, but a man of real genius."

John Owen once went to hear John Bunyan preach. Charles II, hearing of it, asked the doctor why someone as thoroughly educated as he would want to hear a mere tinker preach. Owen replied, "May it please your Majesty, if I could possess the tinker's abilities to grip men's hearts, I would gladly give in exchange all my learning."